Research commentary: "Contested Knowledge: A Critical Review of the Concept of Differentiation in Teaching and Learning"

In this article entitled “Contested Knowledge: A Critical Review of the Concept of Differentiation in Teaching and Learning” written by Sasha Taylor, the paper outlines her case for how differentiation has led to increasing inequality in the classroom. It starts with an introduction to her definition of differentiation, theories and knowledge, implementation, benefits, and then outlines the factors she believes impacts differentiation – socio-economic background, gender, culture.

Her premise is that there are benefits such as increased learner motivation when differentiation is implemented effectively in the classroom, but it is challenging to achieve daily because of the heterogeneous nature of most classrooms. Taylor suggests that for differentiation to be successful, teachers should make accommodation for learners’ varied levels, needs and backgrounds, and advocates for more research-led strategies aimed at closing the attainment gap among learners, particularly where differentiation fails to challenge existing learning paradigms.

The article starts by laying out her hypothesis in the abstract and then using trusted sources throughout the document to make her point. Firstly, Taylor introduces what differentiation is and concludes the paragraph by highlighting Hertberg-Davis’s 2009 quote that teachers, particularly those who are new to differentiation, often misunderstand the technique, applying it as a form of ‘scaffolding’ for weaker learners, or as a group work strategy.

The author then moves onto to highlight J. Terwel’s assessment that there is no guidance on when and how to differentiate appropriately and how this might be achieved. Instead, individual teachers have to decide what they consider to be best practices in different learning environments. Stating that teachers are usually best placed to understand the needs and abilities of their student's variations in experience, understanding, organizational culture, and resources in differentiation have led to the emergence of inequality in classrooms.

She goes on to describe the many benefits of differentiation and how effective uses can be associated with increased learner motivation, higher academic achievement, and greater collaboration among students with similar abilities (McNamara and Moreton, Gentry, and Owen, Hertberg-Davis). Educators increasingly recognize the use of effective differentiation to fulfill the needs of each learner. Moreover, successful differentiation can fulfill the varied needs and abilities of students in the same classroom (Haelermans).

The next six sections of the paper outline the author's case on how each of the different social factors will impact how successful differentiation will be inside the classroom. Social Class: Mickelwright argues that while deploying techniques such as differentiation was an attempt to ‘bridge the gap’ between students and to improve learning for all students, it failed to contribute to increased equilibrium. It is indicating that social class and parental education significantly impact academic results even when the quality of teaching and ability are consistently controlled. Socio-Economic Baackground: Bakker states that there is a direct correlation between a student’s academic achievement and their socio-ecconomic background. In particular, students from families with higher socio-economic backgrounds usually have superior academic outcomes than those with lower socio-economic status. This observation indicates that for differentiation to be successful, teachers need to make accommodations for learners’ varied levels, socio-economic backgrounds, and psycho-emotional characteristics, as these are critical components that may effect learning (Valiande).

The author poses the crucial question as to whether teachers are equipped with the skills and knowledge to facilitate the deficit caused by being from disadvantaged backgrounds the the provision of effective differentiated tasks or instructions for individual learners. She goes further to suggest that maybe there needs to be greater emphasis on support and motivation for students to succeed regardless of the teaching methods deployed in the classroom. Gender: Even though inclusive teaching plays a significant role in dispelling the tradional gender specific expectations, there still remains uncertainty sbout teachers’ ability to effectively differentiate for the varied characteristics pf learners (Westwood) The author indicates that there needs to be further analysis on the impact of gender in implementing effective differentiation across a range of curriculum and in addition (Blemmi) argues that the operation of perspectives such as differentiation in closing the the gender gap in education needs to consider, not only teaching activities, but also a critical appraisal of academic culture and curriculum development. Culture: Differences in culture can significantly impact students’ reactions or behavior towards certain activities or tasks in lessons. In addition, individual students from different ethnic backgrounds mas vary in the way they see teachers in terms of indifference, disdain or respectability (Westwood) Therefore, for teachers to successfully implement differentiation and increase intrinsic motivation for learners for varied cultures, they need to understand the components of multicultural education (Neumeister). 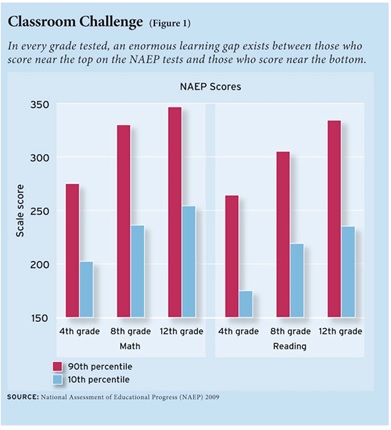 Another thing to keep in mind when looking at factors that could effect differentiation achievement outcomes is the learning gap that could be attributed to some or all of the factors mentioned in the previous paragraph. According to (Petrilli) U.S. students are all over the map in terms of achievement (see Figure 1). By the 4th grade, public-school children who score among the top 10 percent of students on the National Assessment of Educational Progress (NAEP) are reading at least six grade levels above those in the bottom 10 percent. For a teacher with both types of students in her classroom, that means trying to challenge kids ready for middle-school work while at the same time helping others to decode. Even differences between students at the 25th and the 75th percentiles are enormous - at least three grade levels.

In a research article, “Differentiated instruction: The effect on student achievement in an elementary school” (Koeze). Where several questions were asked, one being, “Does differentiated instruction lead to increased student achievement?” She states that Students who reported differentiation for learning styles had increased achievement in reading. Also discovered through the qualitative analysis was that choice, interest, and learning styles all had an impact on the students’ interests and motivation in class. The second question “Are there components of differentiated instruction that have a greater impact on student achievement than others?” Results from this study indicated that there were components of differentiation that led to higher student achievement than others. However, it became increasingly evident through the qualitative analysis that these components were not so easily distinguishable. The teachers interchanged the terms learning styles, choice, and interest during their interviews. The variables that were found to have the most significant impact on student achievement were choice, interest, learning styles, and pre-assessment, both formal and informal. Student survey results indicated moderate forms of pre-assessments occurring. Through classroom observations and teacher interviews, it became clear that the ongoing informal assessments truly directed the instruction in these classrooms. Informal types of pre-assessments were more than likely not recognized by the students.

Taylor concludes the paper by using debates by Civitillo, Denessen, Molenaar, and Haelermans that indicate that teachers might be aware of the impact on non-school and unobservable factors on teaching and learning, but are not adequately equipped or trained to ensure they are intertwined with differentiation techniques to achieve successful results. Within this context, teachers need extra time and effort to successfully implement differentiation. Furthermore, class sizes, planning time, resources, increased teacher responsibilities, and arrangement for collaboration with colleagues, must be taken into account for consistent application and effectiveness of differentiation.

Stay up to date with Class Measures news and industry insights

Class Measures is the US subsidiary of Tribal Group plc, an international education services provider founded in 1999.